ITALIAN, PORTUGUESE, SPANISH AND
LATIN AMERICAN SYMPHONIES
From the 19th Century to the Present

A Discography Of CDs And LPs
Prepared by Michael Herman 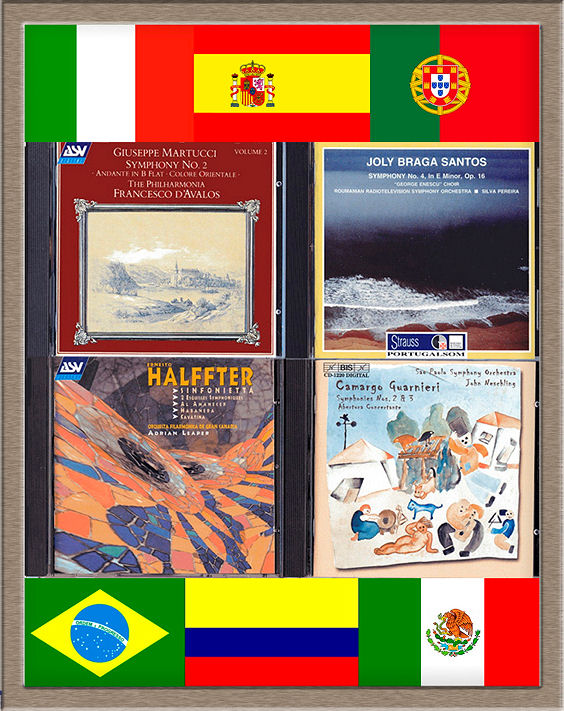 The title of this discography is self-explanatory. The composers included were either born or came to settle in Italy, Portugal, Spain or the various nations that constitute Latin America. Despite the vast amount of geographical territory that these nations cover, the number of symphonies produced by their composers is relatively small for various reasons. Even though there are some early examples of symphonies in all of these places, the composition of orchestral music in general, and symphonic writing in particular was relatively rare. The three Southern European nations, especially Italy, were places where vocal music dominated throughout the 19th century and in Italy, the term “sinfonia” was synonomous with “overture.” The symphonic tradition was so weak in Spain that her greatest composers, Isaac Albeniz, Manuel de Falla and Enrique Granados never attempted the form. Latin America’s colonial societies, with some exceptions, were mostly lacking in the fundamentals of European musical culture. However, more than 150 composers are represented in this discography, the vast majority of whom wrote their symphonies in the 20th century. With the exception of a few composers such as Heitor Villa-Lobos, Carlos Chávez, Joaquin Turina and Nino Rota, most of the names included here are relatively unknown except to specialists. Furthermore, unlike in all the other discographies that preceded this one, there is not a single symphony included here that is part of the standard repertory of symphonies that are played the world over.

As in the previous discographies in this series, no attempt has been made to list every release of every recording of each work. There have just been too many reissues, especially from the major labels, to make this feasible for many recordings. Instead, what are listed are the most current issue the author has located and the earliest release (if any on LP or CD) of that particular recording. In general, multi-disc compendium releases are omitted unless they contain a unique recording or the sole modern reissue of a previously released performance. Recorded is here defined as being available in a physical format that can be (or could have been) purchased or obtained from either a commercial or non-commercial source. Tape recordings, DVD’s and formats other than CD’s or LP’s are not included.

The entry for each composer consists of two sections. First there is a compact biographical paragraph that notes some essential information such as place of birth, higher musical education (including schools and prominent teachers), subsequent musical careers in addition to composing and details of other symphonies that have not been recorded. Compositional styles are not discussed in these paragraphs and readers are referred to the bibliography where various reference books that cover this subject are listed. The second part of each composer entry consists of lists of his or her symphonies that have been recorded and the various recordings of each work. Symphony is defined here as any work the composer has designated as such in its title including works called “sinfonia” or “sinfonietta.” The works can be for full orchestra, chamber orchestra, strings, winds, brass or chorus and orchestra. For every symphony that has them, the opus number, key signature and title are noted and the year of composition or première (if known) is stated for all. The entries of the symphonies that have had multiple recordings are listed alphabetically by the conductor’s name. Each listing of a recording consists of the following components: (1) Performers (in this order if all are involved – conductor, soloists, choral group, orchestra), (2) Other works on the recording. (3) Label and catalogue number and year of issue and (4) If the recording is a reissue, the original LP or CD release and its year of issue. Please note that the performers listed are for the entry work and not necessarily for the works that it is coupled with. Also, in most instances when an entry work is included in a large collection (especially if most of the other works are not related to the discography’s subject) the list of couplings is not given but replaced by the title of the collection.